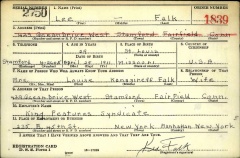 This article looks at the WW2 years and which period may contain possible ghosted Mandrake and The Phantom stories.

Chief of Radio of the Foreign-Language Division

Office of Facts and Figures

In October 1941, Archibald MacLeish was appointed director of the OFF[footnotes 1], an independent government information agency. To head the FLD[footnotes 2] within the OFF MacLeish chose Alan M. Cranston [footnotes 3].

Cranston wanted Lee Falk[footnotes 4] to serve as associate chief and handling radio[footnotes 5] issues. In Cranston's letter[1] inducing Falk to take the job, he explained that Falk would: compose radio scripts for use in foreign-language broadcast designed to provide information about the war, to boost morale, and to sell the war to the German, Italian, and other groups in this country.

Early[footnotes 6] 1942 Lee Falk started his work in Washington. He established[2] a close collaboration with OFF Radio Division, attending their weekly radio conferences with committees of agencies, stations and networks. He also established[2] collaboration with the Broadcasters Victory Council, setting up an exchange-of-program-ideas service. A new program "Uncle Sam Speaks" was scheduled for WOV in New York in Italian, later to be reproduced in German.

During[footnotes 7] the NAB[footnotes 8] Convention in Cleveland Lee Falk explained how enemy interests were attemting to capitalize on foreign tongue programs The broadcasters set[3] up a temporary committee to set up a organization of self regulation, where all personnel should be clared through this committee.

He headquarter was[4] set up in Washington and Arthur Simon was elected as the first chairman of FLBWC[footnotes 9] in June 1942, and a voluntary code for the 210 stationes was adopted. During their first meeting Lee Falk agreed to act as liaison between the committee and the various Governmental agencies identified with or interested in foreign language broadcasting, included the Office of Cencorship, Federal Bureau of Investigation, intelligence branche of the Army and Navy, and OFF.

On June 13 1942 OWI[footnotes 10] was established as a federal agency, to conduct the government's wartime information and propaganda programs. It came into being by integrating several agencies — including the OFF, with the FLD as part[5] of the Buerau of Special Operations, headed by Philip Hamblet.

From the viewpoint of the war effort employes were found to be undesirable and had lost their positions. FLBWC had asked Lee Falk if his office could help them finding out whetever a person or persons had a clean mind. As a precaution against re-hiring these undesirable employes Arthur Simon sent out a letter[6] to all foreign-language stationes urging them to contact Lee Falk before hiring new personell.

A questionnairie[7] from October 1942 showed that about 7% of the broadcast time was given to public service programs, almost all prepared by OWI. Like for Labor Day 1942 where Lee Falk recorded[8] four transcriptions in Spanish, Polish, Italian and German. The 15-minute transcriptions, Free Labor Will Win, included speeches by many educational civic and labor leaders. In addition OWI recommended that the stations also arranged to have local labor leaders to follow the transcription to round out a half-hour program.

Late October 1942 the Goverment and industry plans[7] for regulating foreign-language radio plans were explained at a FLRWCC[footnotes 11] meeting in Washington. The FLRWCC was to be the liaison between official and individual broadcasters. A three-way system of Governmental direction was reviewed:

Charles Olson described[9] the FLD quartered in the Library of Congress Annex as a big, open office that was crowded, noisy, an bustling with activity as a city room of a large urban newspaper. He described his immediate superior, Lee Falk, as a witty, fast-talking Brodway writer-producer. Olson worked writing press releases and radio speeches on the draft and price controls, war bonds and gas rations.

By 1943 Congress made a varity of accusations against the OWI, as a political tool, and began its investigation. A more specific accusation involving the work of the Radio Section of the FLD and its head, Lee Falk. The inquiry, chaired by Edward E. Cox, claimed that in addition to the initiated moral- and unit-building foreign-language programs they also removed from the air broadcasters who were considered pro-fascist. The Cox Committee claimed that radio stationes were pressed to dismiss personnel by holding the treat of license suspension over their heads, attendent to force upon radiostations a pro-Russian or an arbitrary OWI slant, and that Falk used the division to secure publicity for himself and employment for his friends. The inquiry started in August (1943) and by the end of the month Lee Falk had quietly quit[10] his job at OWI.

Private in the United States Army

In 1944 Fort Devens was a reception center for all New England men. Fort Devens trained nurses, chaplains, cooks and bakers as well as the troops of the 1st, 32nd and 45th Infantry Divisions and the Fourth Women’s Army Corps. In addition, a Prisoner of War Camp for German and Italian soldiers opened at Fort Devens in February 1944.

Lee Falk was[11] enlisted with no branch assignment at Fort Devens (Massachusetts) on Mars 7, 1944. A week later he was presented[12] at a Groton Rotary club meeting as an army private stationed at Fort Devens. Little is known about Lee Falk's service during WW2, but a service normaly started[13] like this:

In 1944 the average basic and individual training period was 17 weeks, followed by 11 weeks with small unit training and 11 weeks with combined arms training. Lee Falk himself said[14] that he promptly was shipped from one end of the country to another. This sounds like a service at various infantry replacement training centers, which were located throughout the southern and southeastern United States.

Lee Falk also said[14] that he 12 times was on the verge of going overseas, and 12 times the orders were cancelled and he was sent to some other post. Adding a 40 weeks training period and about 22 leave days to the enlistment date this had to be after mid February 1945.

Mandrake the Magician and The Phantom

In Washington Lee Falk was[15] one of several dollar-a-year men, and his income was from his newspaper strips. In 1948, Phil Davis said[16] that Lee Falk did mail two or three months' supply at a time. In 1967, Lee Falk said[15] he created a few weeks of script for both Mandrake and The Phantom at a time, spending eight to ten hours a week on this. Even if Lee Falk probably worked long days in Washington he could continuing writing his script for Mandrake and The Phantom. Also several scripts in this period are about the war theme and intelligence, inspired by his work at OFF/OWI.

By the end of August 1943 Lee Falk had quit his job in Washington and back in New York he wrote the Passionate Congressman, inspired by his experiences in Washington's political environment.

He also worked[15] feverishly plotting and writing an army-term-lenght supply of Mandrake and The Phantom. It seems that this task was difficult to complete and Lee Falk found that he needed help from a ghost writer. In an interview Alfred Bester confirmed[17] that he had worked on both The Phantom and Mandrake during WWII with an anecdote:

In this anecdote Bester mentioned that he had moved out of the Stephen Vincent Benét house, where he had a wall of silver prints of Green Lantern. Stephen Vincent Benét died on March 13, 1943 and according to GCD Bester’s first Green Lantern story was in the shops fall 1943. The anecdote then must have taken place just before March 7, 1944, when Lee Falk was enlisted as private at Fort Devens.

At the barracks a soldier had almost no personal space, only a bunk, a foot locker, and maybe a shelf for a few photographs. A typical daily schedule in the army started 06:30 with first call and back to barracks at 17:45, then followed supper at 18:45 and lights out and taps at 22:00. To write the scripts for Mandrake and The Phantom Lee Falk needed about eight to ten hours a week. As a soldier the week days gave little time for writing. On Sundays it could be possible, but most likely, he did not have a typewriter he could use. A soldier did earn days of leave (about 2 1/2 days a month) and most likely Lee Falk had longer leaves after the various training periods. About 9 days in the end of August 1944, a week in mid November 1944 and a week early February 1945. During his longer leaves it is possible that he managed to write supplies with scripts to Phil Davis and Wilson McCoy.

The demobilization of the armed forces began with the defeat of Germany in May 1945 and continued through 1946. It is unknown if Lee Falk was released from the army late 1945, or shortly after May. His name is mentioned with some of the plays at the Cambridge Summer Theatre in Juni/July, but not all of them. In July he also met his future wife, Constance Moorehead, who acted at the theatre.

An analysis on how Lee Falk had worked before 1944 indicates that he had to send his scripts to the artist about two-three months before the publishing date in the newspapers. Moreover, it appears that he often did not write a story from the start to the end, before sending the scripts to Phil Davis and Ray Moore (/Wilson McCoy). Small changes in the stories from Saturday to Monday indicate that there may be a time difference in the writing process of a script. Often a new story started at the same scene where the previous story ended and with a reference to the last story, indicating that this part is written at the same time.

Lee Falk's stories can be divided in three parts, known as a three-act structure[18]: