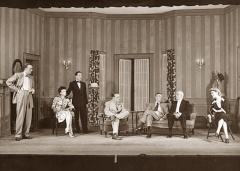 In autumn 1943 Lee Falk had quit his job as Chief of Radio of the Foreign-Language Division of the OWI and returned to New York. Inspired by his experiences in Washington's political environment he wrote a new play, "The Passionate Congressman", and copyrighted[1] the play on February 11, 1944.

Herman Shumlin, a prolific Broadway theatrical director and theatrical producer, was all het up about it and wanted[2] to do it when he returned from a Hollywood commitment. But Lee Falk wanted to see his new play produced before he was to go into the service and submitted it into Eddie Dowling office. Dowling hesitated and wanted other to decide whether to put the play on. Lee Falk then sent[3] the script to Reginald Denham, with Meyer Davis as the producer, althaught Theron Bamberger was reported to be interested.

Later in 1944, Lee Falk said that Eddie Dowling got a theatre in Chicago for the production of "The Passionate Congressman", but that he (Lee Falk) wasn't able to get a furlough to attend reharsals. Dowling decides to postpone the production for a week or two until Falk could arrange to be there. In the meantime Dowling decides he would fill in the time with some little noncommercial thing he had found, called "The Glass Menagerie" [7].

According to Ralph Thomas Kettering, manager of the Civic Theatre, he met Alex Yokel while walking in Chicago. During the conversation Kettering told that he was looking for a play and that Yokel told he had one, "The Passionate Congressman" financed to open in January 1945. Kettering said he needed a play to Christmas night. They decided to visit Eddie Dowling to have a look at the new script "The Glass Menagerie" by Tennessee Williams [8].

"The Passionate Congressman" opened at the Cambridge Summer Theatre June 25, 1945 [10]. Neil McFee Skinner did[11] the preliminary work on the script and during the rehearsals it was named "Easy Does It".

James Dunn did read the script and did not dismiss that he might return on stage this season [12].

(from The Boston Globe, June 27, 1945, p 7)
The Cambridge Summer Theatre is given first performances this week of a new play of considerable promise, "The Passionate Congressman" by the theatre's associate manager, Lee Harrison Falk. It is not remarkable, but good entertainment, with witty, punchy dialogue and a whole gallery of salient characters. It definitely is an actors play. Given a carefully chosen cast some needed revision and cutting to bolster the prevadingly good construction, and a Broadway production, it would have good commercial potentialities. Fixed up to suit the finicky notions of the Hays office it also would make a good movie.

There are two kinds of Congressmen, says Mike Harrigan, the crooked Chicago political boss: the sensible kind who are reelected and the passionate, crusading kind who don't get sent back to Washington. When "Easy" Nelson, Mike's protoge, fights for an antirace discriminitation amendment to a bill Mike sells out "Easy" and secures his defeat. But Elaine Bowersmith, the girl who interest "Easy" in the amendment; young Doug Greenville and old Justice Carveth, the honest friends of "Easy", know that this defeat is but the prelude to a statesman's career. Even Tessie Stroh, who has been both mistress and secretary to "Easy", accepts that point of view, marries "Easy" and the future looks bright after all.

Neil Hamilton does an excellent job as the sophisticated, brilliant Representative, ably seconded by Edmon Ryan -who has the best lines- as a smart newspaperman. Gertrude Flynn as Tessie Stroh, Louise Valery as Elaine, the Mike Harrigan of Frank McNellis and the Justice Carveth of John McKee deserve their need of approval.

(from "The Billboard" July 7, 1945, p 38-39)
Lee Harrison Falk has latched onto the tail of a tiger and done very nicely by it, too. He has managed to write a controversial play which is logically concluded and well constructed. And it packs enough chuckles to reduce the pain of thinking. He has also whipped up an opus which will pull in cash customers and (in case some fragile-nerved congressman gets a probably case of acute investigationitis) the musical comedy traffic. It's that easy to take. But there won't be any two ways about audience acceptance. You either will or you won't like the play.

"The Passionate Congressman" title stems form Chicago's political boss, Mike Harrigan. This astute organization politican observes that a "sensible" congressman gets re-elected. A "passionate" congressman doesn't. When the The Honorable Daniel Emmet Nelson, nicknamed by his affectionate congressional buddies as Easy, decides to revert to his original status as the crusading "White Knight", Mike Harrigan dumps him overboard from the machine. The idea that a 10-year member of the Congress can fall for a Fair Employment lobbyist in the person of attractive Elaine Bowersmith is, in itself no excuse for the crusading policy suddenly unearthed in Easy. How the battle comes out is little matter which rates orchids for Mr. Falk. He doesn't duck back into his playwright's hole and leaves things in your lap. He solves his problem, and minus a magician's rabbits.

Bright and sparkling is Edmon Ryan's portrayal of Wilie Stark, news service reporter with an acid-dusted tounge and a heart in the right place. Neil Hamilton, as Easy, is tailor-made for his part and, better still, will put the necessary conflict more obviously after a few more evenings in the part. Elaine Bowersmith played by Louise Valery, is a good role. It is made better by her return to the Cambridge pastures.

"The Passionate Congressman" adds up to good theatre, good and timely thinking, and the grade of excellent "sleeper" material for a Stem chance.

(from The Harvard Crimson)
Lee Harrison talk's book for "The Passionate Congressman" is patent Journalese in three acts, and when supported by a well-picked, if understandably less well-recharged, cast it makes excellent summer theatre entertainment.

Academically, the label "journalese" can become harsh criticism. But what Lillian helm and does in "The Searching Wind" and what Edward Chodorov does in "Decision" if then made good propaganda and poor theatre. For the same reason that a newspaper editorialist and make facts and figures more palatable than a Congressional committee report, talk, by accenting the personal, can make the social issue of race discrimination more acceptable to the requirements of the stage.

On the other hand, "The Passionate Congressman" is subject to the adverse criticism of Journalese: it is flippant; it never in fact explores the problem it is talking about. But it covers up with so many good lines, as when the Supreme court Justice shrugs off the predatory female with "I have never interfered with free enterprises," that social analysis never gets in the way of entertainment.

There are two types of Congressmen, as the play's political bass puts it: the passionate one and the sensible one, be, with the latter seeking only re-election. In the same way, there are two sorts of summer stock managers: the one who re-stages the old standbys and the one who experiments with new talent. John Huntington, who first promoted the Margaret Webster "Othello" and the Margaret Webster "Othello" and the current "Dark of the moon," may well have another candidate for Broadway.