In 1954, a 30 minutes (26 minutes without commercials) unaired black and white tv pilot was filmed, shot partly at the NBC’s studios in New York and partly on location in Bermuda. The tv pilot is based on Lee Falk's comic strip "Mandrake the Magician".

In 1950 Filmcraft Productions (Hollywood) signed by ABC-TV to produce 52 half-hour TV films based on "Mandrake the Magician" comic strip. [1]Paul Schmutz Jr. did work on the Groucho Marx Show, Mandrake the Magician and The Flying Tigers, which was planned for winter release. [2]

In 1953 the ABC's film syndicate division was formed and they continued their work on Mandrake the Magician. [3]During a national sales conference in New York ABC Film Syndication it was told theat Mandrake the Magician wow was in production in Bermuda and slated for syndication to stations for October 1st broadcast. ABC had plans for an extensive advertising, promotion and merchandising campaign to coincide with the launching of the Mandrake series. [4]The firm's merchandising-promotion chief, Lee Francis, was preparing merchandising material to offer sponsors of the series. Among the items being was Mandrake comic books, which could be imprinted with the sponsor's name. Reportedly King Features had offered to help sponsors of the series tie in with newspapers carrying the Mandrake strip, in whereby the sponsor and station carrying the show would get a Watch Mandrake line over the comic strip in return for a Read Mandrake plug on the air. [5] Finaly the first episode og the Mandrake the Magician series was syndicated. [6]

Herald Television (jointly owned by ABC and John Cibbs) was to produce the show but the firm (Atlantic Production ?) Herald had hired to produce the show in Bermuda had some financial problems. [7]ABC-TV was to take on distribution and financing, [8] but about October 1955 a new procucing firm was named in the ads for the Mandrake the Magician show, Bermuda Productions. Will Jason signed[9] to direct a series of 26 "Mandrake the Magician" tele-films, but after the pilot no further episodes were made and the project of a regular series was finally dropped. 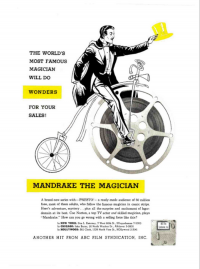 Plot for the Pilote episode

Mandrake (Coe Norton) has a gig at the Parakeet Club. His last illusion is the Vanishing Princess. Backstage when Narda (Lisa Howard) starts to crawl out of a box she’s kidnapped. When she’s missing Mandrake thinks she went back to the hotel. Then he gets a call from the kidnappers. He’s given an address and told to come alone.

Lothar (Woody Strode) goes most of the way with him. When he gets there he’s told by Mr.Brown that his group is looking for secret agent Edwards. He’s got some information they don’t want to get off Mordica Island. In the cellar is Edwards aide Wilson. Narda is also being held there.

Wilson won’t talk so Mandrake is told to hypnotize him into telling Edward’s location. He says a sub is coming to pick them up and he gives the location of the cave where they’ll be met. Mr.Brown doesn’t keep his word and tells Mandrake he and Narda are staying put.