The daily strip were printed in newspapers with 8 columns a page, and with the Mandrake strip spanning 5 or 6[footnotes 1] columns. Newspapers were printed in different sizes and the columns therefore had different widths. But, a five columns wide newspaper strip was roughly 10 and 1/4 x 3 inches (260 x 762 mm). - Roughly half of the original art by Phil Davis, and about the width of a standard modern comic book (10 and 1/8 inches).

In addition the strips were printed with the title[footnotes 2] was typeset (in all upper case letters) and positioned to the right in the white space area above that strip, with the byline[footnotes 3] on the right. An episode subtitle[footnotes 4] (in upper and lower case) was centered between the title and the byline. 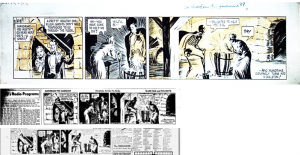 original vs 6 and 5 colomns

In 1942 newspapers began cutting back on the number of comics they printed due to shortages of materials (including newsprint and ink). KFS responded by offering comics in reduced sized. Phil Davis started to draw the Mandrake strip in about 17 x 4.5 inches (433 x 114) so the strips could fit a 4-column width. To accommodate the newspapers who continued to print the strip spanning 5 columns as well, the Mandrake strip was from October 12 available in two different variants: 4 and 5 columns width.

As seen in the fifth week of Baron Kord the original panels in the strip were enlarged on the sides with extra ink to make a 5 columns strip. From the sixth week this was done by cutting away the lower part of the strip.