After ending his military career he attended the Cartoonists and Illustrators School[footnotes 2]. During his studies in the years 1953 to 1956 he had teachers like Burne Hogarth, Dan Barry, Jerry Robinson among others. In 1954 he was one of the 18 winners of the Annual June Exhibition of the Cartoonists and Illustrators School. He was[1] on of the 3 winners in the Comic Books and Comic Strips category, each awarded with a $3.600 prize. The two other winners were William Montes and Angelo Torres. At the same time Fred Fredericks began freelance cartooning, advertising and greeating card work.

In 1957 Fred Fredericks married Frances Brungard. In 1958 their daughter Constance "Connie" was born and the family moved from Pleasantville to Gilette in 1959. Fredericks also sold his first historical newspaper comic strip, "New Jersey Patriots" in 1959, followed by "The Late, Late War" and "Under the Stars and Bars".

With about the same theme, he also did two covers for the "Leatherneck - Magazine of the Marine".

He then began to create comic books for "Gold Key" and "Dell", including "Nancy", "The Twilight Zone", "Mighty Mouse", "Barney Google and Snuffy Smith", "Bullwinkle", "Mister Ed" and "The Munsters".

Lee Falk modernized "Mandrake the Magician" when Fredericks took over the strip from March 21, 1965 for the Sunday pages and May 3, 1965 for the daily strips. Making it more reality-based by focusing less on science fiction and fantasy, and making Mandrake operate more like a secret agent, often helping out the police with cases they could not solve. After working on "Mandrake the Magician" for a long run of 48 years, Fred Fredericks announced his retirement after making 6 weeks of "Vanguard of Shadows" (story interrupted after the strip of July 6, 2013 / from July 8, 2013 the ongoing daily strip are only colored reprints of previous stories). He passed away on March 10, 2015 in Hyannis, Massachusetts. 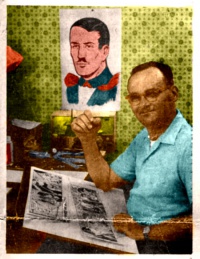 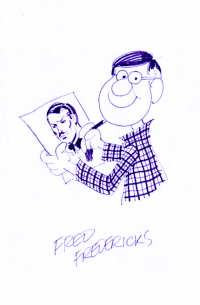